As you know from my last post I was preparing to fly with Lillian for the first time and by myself! After my anxiety settled down I was able to focus, make a plan and basically just get my shit together. Our first flight of the day was at 5:30am – hello adrenaline! I got about an hour of sleep since I had to be up at 2am! I needed time to feed her, load the car up, make my coffee, and make sure I wasn’t forgetting anything (which of course I did anyways)!

Tip #1: Don’t overpack! Especially for what you are wanting to bring as carry on. Bring exactly what you will need for your flight and extra stuff goes in checked bag. I packed way too many toys for this girl, and she only played with two of the million I had. Lesson learned.

I tried so hard to not overpack because that was one of the biggest tips I was given. I had one big checked bag, diaperbag backpack (which freaking broke before I even got to security!!), small duffle bag for carry on and her travel stroller. So not too too bad, right?

I decided I didn’t want to bring her car seat since a friend where we were headed had one for us to use. So it was just one less thing I didn’t need to worry about.

Tip #2: Pack extra outfits for baby and a shirt or two for yourself. Lillian has bad reflux and spits up a lot – so I needed to change my shirt at least once because she spit up everywhere. I didn’t want to sit next to someone stinking like spit up the whole flight. . . Especially with how nasty her formula smells.

She did so great on her first flight – I was so proud of her! Now, she is an easy baby overall, but of course I worry too much! At first, she did keep trying to steal the persons magazine who was sitting next to us! 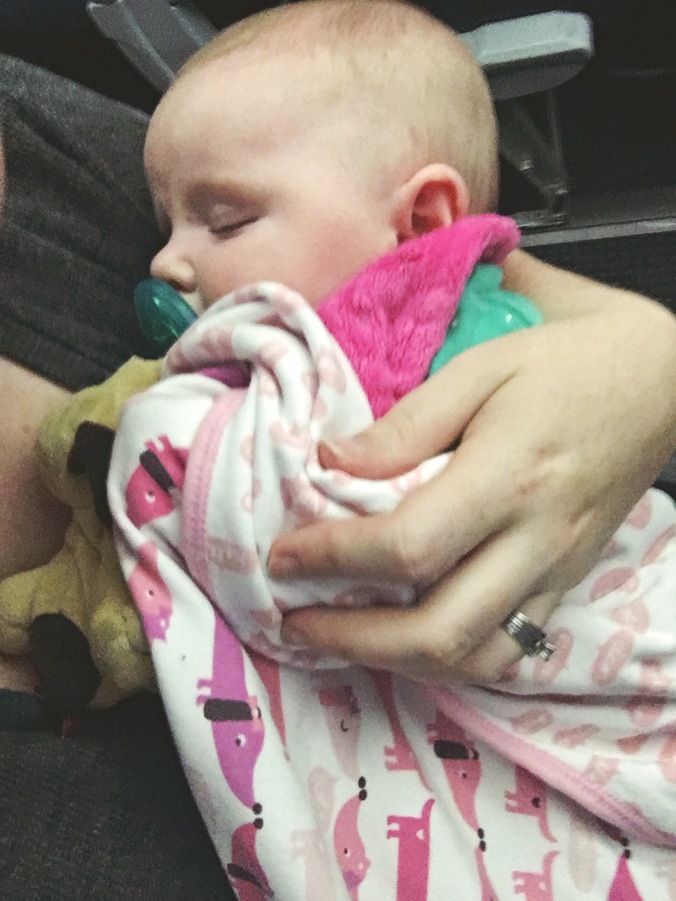 Tip #3: Pay attention to the times you have booked your flight, especially if you have connecting flights. I wanted the earliest flight possible in the morning because I didn’t think the plane would be packed (not true) and she would sleep on the flight (very true).  Also, I think it’s best if you sit in an aisle seat instead of near the window, incase you need to get up and walk with the baby or easy access to the bathroom.

We had a connecting flight in Charlotte and I made sure when booking my flight I had enough time to get to our new gate and feed her a bottle.

Tip #4: Don’t be afraid to ask for help – especially if you are doing this alone. Also, ask the flight attendants if there are any open rows so you can have a few seats to yourself and baby!

I had so many people being so nice and giving me a hand with my bags getting on and off the plane! As soon as we got to our seat I knew Lillian wasn’t planning to sleep anymore – she was wide awake and ready to go! The flight attendant was so sweet and got us a whole row to ourselves once everyone boarded! 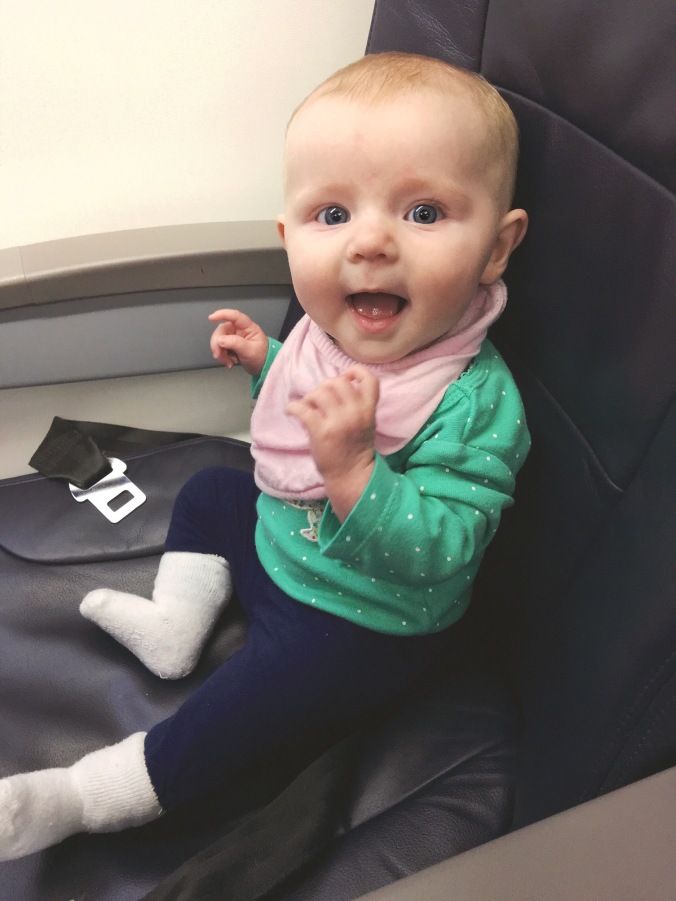 I read that you shouldn’t sit in the back of a plane with a baby (not sure exactly why) but it worked out for us. I was right next to the bathroom which in the end I really needed because Lillian decided to have her first blow out 20 minutes after take off!

Tip #5: Babywear! Seriously, best thing ever. I used her stroller to carry diaperbag and my carry on bag. I brought my Tula and Mayawrap ringsling. I wasn’t sure which one I was going to prefer at the time. I ended up using the ringsling since I could get her in and out very easily when we needed to take off and after landing. Hands free in the airport is the way to go!

It was a good first experience with flying with Lillian. I learned a lot for when we fly back to South Carolina next week. Hopefully baby girl does a good job on those flights – if not, it’s okay! I need to not stress too much about it because I know there’s nothing I can do and she probably feels the stress too. We fly back around her bedtime so I think she will sleep most of the time anyways.

Hope you enjoyed these five tips on flying with a baby! It really helped talking to other mommies who had flown with babies!

This site uses Akismet to reduce spam. Learn how your comment data is processed.

I'm the mama behind Hello Lilly Bird! Glad to have you here! Click the About tab to learn more about my family and I. Don't forget to follow along on Instagram too!